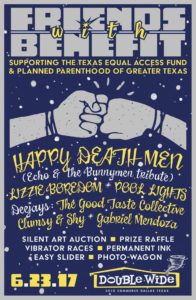 To step up the marketing a bit, we decided to make a few shirts with a provocative campaign to grab attention.

We arrived about 10 pm and the event was already in full swing. Many outdoor vendors like a mobile photo booth, Easy Sliders food truck, an outdoor bar trailer, mobile tattoo trailer, and the silent auction area. The indoor area of the bar was packed. Outside, attendees were attempting to balance the heat with their cold beverage intake. It was so hot! The temp. was still in the high 90’s at that time of the evening, and we have all seen what happens when you try to replace the water your body loses to heat with alcohol.

We grabbed a couple beers, then headed over to the Texas Equal Access Fund and Planned Parenthood of Greater Texas tables to join the mailing lists and see what type of swag they had. Plenty of great information, but we’ll let you decide for yourself how you feel about the cause.

Adjacent to the charitable organization tables was the silent auction area. A temporary wall displayed local artwork, sculptures, and handmade goods. Everything was appropriately labeled to correspond with bid sheets located on the table in front of the pieces. There were already many names and bids on each piece, which was wonderful to see since it was still early in the event. 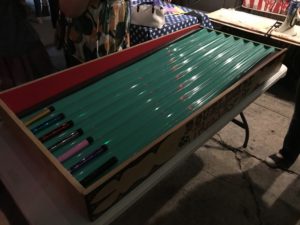 Once the organizer of the races counted off the start, she would lift the starting gate and the vibrators would rumble down its section of track toward the finish line. Lots of cheering and alcohol infused banter ensued until long after the winner had been determined. It was a hilarious and fun time for sure. 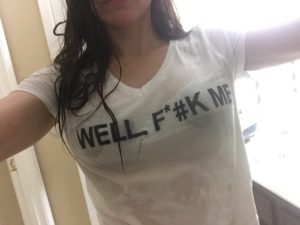 We took in a few races and had a great time with other friends that had joined us. Occasionally we would sneak out of the group to go strategically place some fliers about the Perfect Pleasure

Cushion around the event space. We tried to keep an eye on the fliers to see what the reactions would be. We always enjoy when a small group really get caught up in discussing the pictures and details.

As the night went on, our free light show provided by Mother Nature drew near. Lightning was getting closer and more frequent, so Nikki and I decided to leave before the bottom fell out of the clouds. We learned later that Deanna was still at the event when the rain decided to cool things down a bit. We managed to recover one photo of her soaking wet in a white t-shirt.

All in all, it was a great time and we’re looking forward to more events like this in the future. We’ll try to put those events on our calendar so you can join us. Cheers!